Skip to main content
To provide you with the best experience, Mallin Colorado Ecolodge uses its own and third-party cookies on its website for technical, analytical and marketing purposes. By continuing to browse our site, you're agreeing to our use of cookies. Please consult our Cookie Notice for more information. 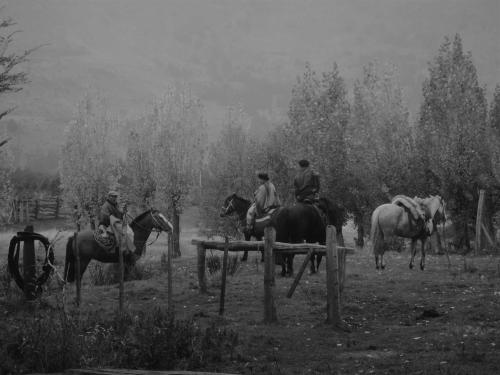 A very special experience and close contact with the local culture, is to live a field day in the home of Don Pedro Soto, inside the Leones Valley. He and his wife have lived in the same place for more than 40 years, a simple house, fruit trees, vegetable garden, hens, sheep, cattle and horses, some corrals for animals and more than 1000 hectares of valley, mountains and glaciers complete the landscape that has surrounded them all their life.
Visiting them is a pleasure. Cozy and cheerful people receive the tourist very simply in their own place, a small room with the wood stove in the middle, where the teapot for the mate always boils and the hostess has something to offer.

They have a lot to tell about all this life living in the isolation of Aysén and they like to share with the tourist the daily life, where every day has a surprise.

In March we were witnessing and participating in the sign of the new cattle, where they mark in the ear and so Don Pelluco and his neighbors know who are the animals that during the winter will seek to feed in the open field.

It all started with Don Germán Fuentes who prepared a quarter of beef for the diners of that day. On the other hand, in the kitchen, the owner of the house and other women prepared cooked potatoes, chopped lettuce, onion and tomato, as well as being attentive to the arrival of the owner of the farm with the animals to the corral. After midday, the troop arrives, about five riders on horseback, and about sixty cattle, large and small, all enter the corral. First stage of the day completed, the animals are already surrounded. Don Pelluco closes the corral and arranges with the assistants and their families for lunch.

Around the fire, and the meat, people have been gathering, mostly young families, relatives of the owners and some friends, like us who have assisted with a couple of Australians. Little by little the salads arrive, the boot with the red wine that begins to walk from man to man making the jet direct from long distance and finally Don Pelluco, the boss of the matter, cleans a sharp knife and begins to cut the meat roasted to the fire.

Everyone takes their plates and they receive their ration, boiling, greasy and tasty like no other meat in the world. Good wine and salad, hot new potatoes complete an unforgettable dish in Patagonia. Amena talks and many "health" to celebrate such a pleasant meeting.

After eating and drinking, the gauchos are arranged to make the day's catch. You have to separate the calves from the cows to mark the new ones. They know what their patterns are and they refuse to be marked. Two knife cuts in the right ear differentiate them from neighboring animals. The task takes more than a couple of hours, until everyone is left with their marks. Meanwhile naturally the group of gauchos attentive to any unforeseen action, stay awake and chacoteros.

The day ends early and the owner of the house retires to rest, after taking his mate in the afternoon, this time with bread and jam, a sweet mate. We also retired having witnessed an unforgettable day, that perhaps few Chileans and doubt many less Australians will have in their life again.

SEE the date to make this field day in Aysén.